A Brief History of Wine in Celebration of National Wine Day

You know a product has made an impact on society when it has a day named in its honor. Wine has two.

National Wine Day is May 25th. That’s not to be confused with National Drink Wine Day, which is February 18th. Whether that means you’re just supposed to stare at a wine bottle in wonder on May 25, but not actually drink it, remains to be seen. Either way, it’s a day to celebrate the undeniable impact that wine has had on our culture, especially in recent years.

Americans have a longtime love affair with wine, but the relationship has gone to a whole new level since the mid-90s. In 1996, Americans drank 500 million gallons of wine. That worked out to 1.89 gallons per person, per year.

By 2016, those numbers had skyrocketed. Americans had increased their consumption to 949 million gallons that year, which means that an average of 2.94 gallons was consumed by each person in our country that year. 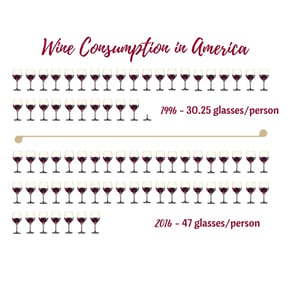 Crazy, right??? And our obsession with wine just keeps growing. Curious about the group of people whose obsession is growing the fastest?

That’s right, it’s the millennials who win the prize (which they probably hope hope is a big bottle of merlot) for the fastest growing group of wine-drinkers in the US. Befor we get into just how much wine they’re drinking, let’s make sure we’re all on the same page when it comes to the breakdown of generations. Different institutions define the generations slightly differently, but here’s a good basic breakdown.

Baby Boomers were born from 1946-1964. They make up 38% of frequent drinkers, which is those who drink several times a week.

Millennials (also known as Gen Yers) were born from 1981-2000. They already make up 30% of frequent drinkers and given that about 1/3 of them still aren’t of legal drinking age, that percentage is likely to continue to rise.

But here are some of the stats of today’s millennials when it comes to wine. (Note that these stats are for the year 2015, the most recent year for comprehensive stats available.)

Wine Drinkers are Taking Over

Although the millennials are certainly driving the wine industry, it’s really a trend that’s taking over America as a whole. Currently, there are a little more than 6,000 breweries in the United States. Comparatively, there are more than 9,600 wineries in our country. There has been a 50% growth in the number of U.S. wineries since 2009.

Need more proof that wine is taking over? Here you go:

Obviously wine is a huge industry, and it shows no signs of slowing down in terms of how much we produce and consume. Instead, it looks to be on the path to continue growing by exponential amounts. As we approach National Wine Day and the celebration of this beloved beverage, here’s why understanding this is important for you.

Why You Need to Know a Little Somethin' About Wine

The first reason you need to know about wine is that, even if you don’t drink it, given how popular it is, you likely know many people who are drinking it. When you host one of your epic dinner parties, you’ll want to make sure you’re serving the right wine with your awesome food.

Secondly, understanding wine and its popularity can help you understand the different types of wine drinkers out there today. No, they’re not all alike. Some are passionate drinkers and some have an occasional glass, but all wine drinkers have their preferences. Here’s a humorous list of typical wine drinkers.

Third, because it’s so popular, wine makes a fantastic gift. And don’t just stick to a bottle you can grab at your local liquor store. There are clever and unique ways to gift wine so that even the bottle is special for the recipient. Doing it this way ensures that you’re giving a memorable gift that the wine-loving recipient will treasure.

How You Can Start to Learn about Wine

There are several different things you can do to educate yourself about wine if you don’t know much about it yet.

Ben Franklin once said, “Wine is constant proof that God loves us and loves to see us happy.” So be happy. Drink wine. Not just on National Wine Day, but throughout the year. This is one bandwagon you'll want to be on, and it's not going away any time soon.